Sign up to myFT Daily Digest to be the first to know about Aukus news.

Speaking on a visit to Washington, where he discussed the Aukus deal with President Joe Biden, the British premier also said Macron should “donnez-moi un break” and get over his anger about the deal.

The UK prime minister’s comments came before a call between Biden and Macron on Wednesday, with Biden hoping to calm tensions between the allies.

Australia’s cancellation of a A$50bn (£26.6bn) diesel submarine deal with France in order to work with the US and Britain to build nuclear-propelled boats provoked fury in Paris. France recalled its ambassadors to both the US and UN in protest.

Biden is expected on Wednesday to restate Washington’s “deep commitment” to its alliance with France, while French officials said the US president was trying to repair the relationship in a “transactional” manner.

Speaking outside the US Capitol, Johnson said: “I just think it’s time for some of our dearest friends around the world to prenez un grip about this and donnez-moi un break.

“This is fundamentally a great step forward for global security. It’s three very like minded allies standing shoulder to shoulder creating a new partnership for the sharing of technology. It’s not exclusive. It’s not trying to shoulder anybody out. It’s not adversarial towards China for instance.”

France has been withering of Britain’s involvement in the deal. Jean-Yves Le Drian, France’s foreign minister, suggested that Britain was a bit-part player, saying that “Great Britain in this matter is a bit of a fifth wheel on the carriage”.

Meanwhile, Clement Beaune, France’s Europe minister, suggested Johnson was confirming that the UK was a “vassal” of the US.

Some British officials fear the dispute could lead to tougher French positions on sensitive issues including the Brexit trading relationship with Northern Ireland and on the policing of migrants trying to cross the English Channel from France to the UK.

In the call with Biden, Macron will urge him to restore trust between Washington and Paris by acknowledging a role for France and the EU in the Indo-Pacific strategy of western allies, a French official said.

According to the French side, the discussion between Biden and Macron will focus on the “crisis of confidence” resulting from Aukus. Macron, the French official said, expected “clarifications” on why the US kept a European ally out of the loop on Indo-Pacific co-operation.

“We expect from our allies that they recognise that exchanges and consultations which should have happened did not, and that this poses a question of trust about which we must draw the consequences together,” the person said.

Macron was outraged by the Aukus announcement because he was unaware of the trilateral deal, and because he has set great store in France’s role as an Indo-Pacific power with citizens, island territories and 7,000 troops in the region. 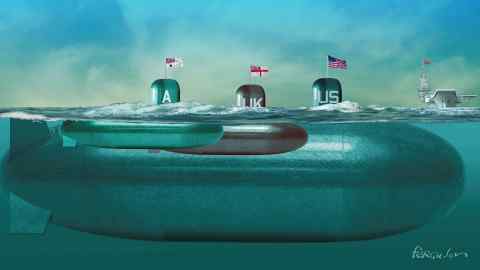 The Biden administration was approaching its attempts to repair the relationship in a “transactional” manner, a French official said, adding that Paris wanted to move into the “second phase” now that it had made a strong declaration against the Biden administration’s handling of the issue in the “first phase” of its response to the deal.

A senior Biden administration official told reporters on Monday: “President Biden has asked to be able to speak with President Macron to talk about his deep commitment to the US alliance with France — an alliance that has fostered security, stability and prosperity around the world for decades.

“The president wants to communicate his desire to work closely with France in the Indo-Pacific and globally and to talk about specific, practical measures that we can undertake together.

“We understand the French position; we don’t share their view in terms of how this all developed but we understand their position. And we will continue to be engaged in the coming days on this.”

A person in touch with Biden administration officials said it was unclear to Washington what France wanted from the patch-up call, whether it was reassurance that the US would confirm a role for Paris in the Indo-Pacific or if Paris was considering pursuing a more independent foreign policy that would be less aligned with the US.