Samsung’s billionaire leader to be freed from jail

Sign up to myFT Daily Digest to be the first to know about Samsung Group news.

Lee Jae-yong, the billionaire head of the Samsung tech empire, will be freed from jail on Friday, a decision that will refocus attention on the uneasy relationship between South Korea’s biggest companies and the government.

Lee was granted parole on Monday, eight months after he was sent back to jail for bribing former President Park Geun-hye to help secure control of Samsung Electronics, the conglomerate’s crown jewel.

The Samsung chief’s two-and-a-half-year sentence was cut short after officials said he was eligible for parole after completing 60 per cent of his sentence. Lee had already spent a year in prison before being freed by an appeals court in 2018.

His release is part of South Korea’s tradition of marking the anniversary of the end of Japan’s brutal rule of the country with mercy for prisoners and marks a reprieve for the world’s biggest producer of smartphones, computer chips and electronic displays.

But the move returns to the spotlight the relationship between South Korea’s chaebol, the companies that dominate Asia’s fourth-biggest economy, and the government of President Moon Jae-in, which promised to bring the family-controlled conglomerates to heel.

“It’s a step backward in terms of chaebol reform and a betrayal to people’s hopes for no more privileges offered to the tycoons,” said Park Sang-in, an economics professor at Seoul National University.

Samsung employees and investors hope Lee will move to launch a spree of acquisitions and investments. They would probably focus on extending the company’s dominance in computer chips as well as boosting its 5G business and artificial intelligence technologies.

Samsung’s most recent significant acquisition was its $8bn takeover of US auto tech group Harman in 2016. Critics allege the company has been hamstrung from pursuing further deals because its 53-year-old scion was distracted by legal problems relating to his succession from Lee Kun-hee, his late father.

But Lee is expected to decide where the company’s next US processor chip factory will be located soon after his release, said Kim Young-woo, an analyst at SK Securities. He added that new investment plans for the company’s display business were also likely.

Lee’s imprisonment has been highly divisive in Korea.

Polls have shown that many South Koreans have supported his release and business groups, including US companies, have lobbied the president to issue a pardon, citing the damage caused to the economy of having the country’s most important corporate leader in prison. 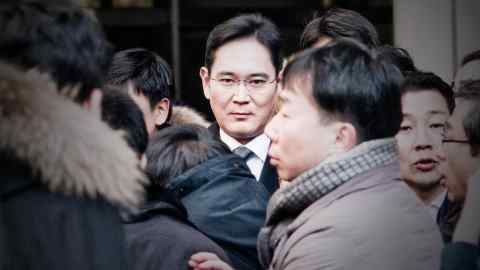 But many others say Lee’s release has undermined Moon’s promises to bring the family-controlled conglomerates to heel and end the tradition of pardoning chaebol leaders.

“They seem to think the decision will benefit them politically since the public opinion is in favour of freeing him. But if the rule of law is not kept with frequent exceptions, this will ruin the public trust of state institutions,” Chae said.

He is scheduled to appear at the Seoul district court on Thursday over proceedings linked to allegations of a $3.9bn accounting fraud at Samsung’s biopharmaceutical unit. Prosecutors believe the moves were orchestrated by the company’s top executives to help cement Lee’s succession.

Lee and the company have denied the allegations.

Lawyers defending the company said a merger between Samsung C&T and Cheil Industries at the heart of the dispute “followed rules and regulations”, while accounting changes at Samsung Biologics “also complied with international accounting standards and regulations”.

The outlook for the Lee family is further clouded by $11bn in inheritance tax that must be paid over five years. Analysts expect Lee and his two sisters to shed stakes in non-core Samsung group companies and boost dividends from Samsung Electronics to pay the bill.