US state and federal officials urged people to do more to combat the accelerating spread of coronavirus as a record number of hospitalisations threatened to put an unprecedented strain on healthcare systems across the country.

California’s governor, Gavin Newsom, had warned Thursday that his state would order a three-week shutdown of all but the most essential businesses and services in areas where hospital ICU capacity falls below 15 per cent.

He said he expected the Bay Area to hit that level later this month, but officials in the region adopted the restrictions before the threshold was met, in order to avert a potential crisis.

“We know that if we wait we are just delaying the inevitable,” San Francisco mayor London Breed said.

We need to aggressively stop the spread now

Los Angeles, the state’s biggest city, has already issued a “safer-at-home” order for its nearly 4m residents. California reported another record one-day increase of 22,018 cases on Friday, while hospitalisations jumped to a record 9,948. Availability of intensive care unit beds in the state fell to a record low 1,673.

The rise in hospitalisations across the US, which crossed the 100,000 threshold for the first time this week, has tracked a surge in coronavirus cases over the past several weeks.

For the first time during the pandemic, all seven of the most populous US states — New York, Texas, Florida, Illinois, Ohio and Pennsylvania, as well as California — on Friday reported more than 10,000 cases apiece.

Those states made up about 40 per cent of the record 224,831 cases reported by states on Friday, according to Covid Tracking Project data. A further 2,563 people died, among the biggest one-day tolls of the pandemic, while a record 101,276 people were in hospitals with coronavirus.

Bob Wachter, chair of the department of medicine at the University of California, San Francisco, said this is the “worst surge of all” and there was little “resiliency” in the system because the disease is surging everywhere at once.

“Things are going off the rails all over the country,” he said.

Dr Wachter backed the decision to lock down the Bay Area, saying the region’s more cautious approach to the pandemic so far had helped save lives.

Pennsylvania’s governor Tom Wolf voiced his concern on Friday about the pressure the record number of infections will impose on hospitals in his state.

“With Covid cases spiking, Pennsylvania is projected to run out of intensive care beds in mid-December,” he wrote on Twitter, just before the state revealed record daily infections of 11,763.

“The best thing we can do is protect ourselves and others from getting this virus,” Mr Wolf added. “Stay home as much as possible, wear masks, avoid gatherings, and practice good health habits.”

State health department data showed there were currently 5,230 people in Pennsylvania hospitals with coronavirus. The number of Covid-19 patients in ICUs was 1,065.

Desperate to avoid a repeat of New York’s crisis in the spring, Governor Andrew Cuomo said earlier this week that parts of the state could be forced to undergo a “pause” akin to a previous lockdown if there is a “hospitalisation crisis”.

The number of hospitalisations in the state reached 4,222 — below the peak in the early days of the pandemic, but well above the low levels the state had seen after managing to contain the virus this summer.

“We will have a limited ability to bring resources from upstate to downstate like in the spring, or from downstate to upstate because literally every region is dealing with an increase now,” Mr Cuomo warned. The state on Friday reported 11,271 new cases — just shy of its mid-April record.

Some places have set up field hospitals to help handle any patient overflow, including in the New York City borough of Staten Island; Worcester, Massachusetts; and Rhode Island, the small northeastern state that this week sent residents an emergency alert warning that its hospitals were at capacity. 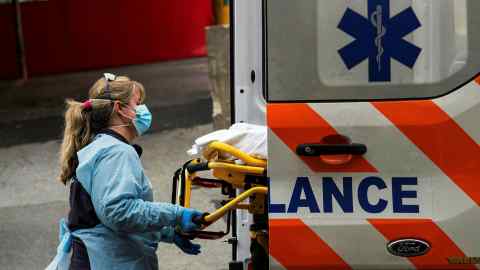 US health officials worry that the coming months may be the most difficult so far in the pandemic as a consequence of increased travel and social gatherings during the holiday season, among other factors.

The Centers for Disease Control and Prevention has urged Americans to forego Christmas travel and stay home to celebrate and on Friday issued its first-ever recommendation that all people should wear masks indoors when they are not at home, citing “high levels” of transmission.

Eric Topol, director of the Scripps Research Translational Institute, said the crisis is bringing the healthcare workforce “to its knees”.

He said there should be stay at home orders in regions where there is “hyper spread” and little to no hospital or intensive care capacity, and called for an enforced universal mask mandate.

“We need to aggressively stop the spread now,” he said.

Joe Biden, the US president-elect, has said he will call for people to wear a mask for the first 100 days after his inauguration in January. By contrast, Donald Trump has said little on the pandemic since losing the election last month, even as case numbers have accelerated.